You are here: Home › Uncategorized › GoShelf is a Beautiful Leg-Shaving Shelf for the Shower 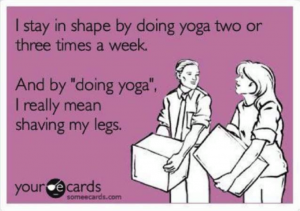 Ladies, are you tired of trying to balance on one leg while contorting into strange shapes just to shave your legs in the shower? Finally, there is an answer to your leg-shaving prayers. Our GoShelf makes a beautiful leg-shaving shelf for the shower.

Ladies (or gentlemen, we don’t judge), wouldn’t it be easier to shave your legs in the shower if there was a step or ledge to put your foot on? Well, you are in luck because the GoShelf works great as a shower step for shaving your legs! The GoShelf, when properly installed, can hold the weight of a full-grown man. As you can see in our video, our corner shower caddy holds over 200 lbs!

Now, if a 200-lbs tile contractor can stand on the GoShelf, you will have no problem using it as a shower ledge for shaving your legs. The GoShelf is so strong because of its engineering and design. It locks into place using a combination of anchor plates and glue. The result is a strong, sturdy shelf that will hold up to the weight you place on it. And unlike other shelves on the market, the GoShelf uses no visible means of support. There are no metal brackets that need to be screwed into the wall or that will rust as time goes by. And there are no any unsightly plastic strips to take away from the aesthetics of your shower!

With the GoShelf, you can add a shower ledge for shaving even after the shower tile has been set. Because this shower system has been designed to be installed on a wall that has already been tiled, you can add a ledge at the exact height you need!

The GoShelf system allows you to install in a shower shaving foot rest in just four simple steps. It installs without removing any tiles or making large invasive cuts to your walls. Remove the grout with the hand-held grout saw include with the kit, glue and insert the anchoring plates, add glue to the GoShelf, slide the shelf onto the anchoring plates, finish with a fresh coat of grout around the shelf, and you’re done!

Once you GoShelf, you don’t go back!