You are here: Home › Uncategorized › Install Our Shower Shelf on an Already Tiled Wall 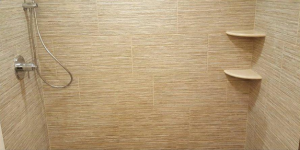 Our GoShelf shower system makes installing a shower shelf on an already tiled wall easier than ever before. A job that used to require a hired contractor or expensive power tools is now a job you can do yourself!

The GoShelf shower system is specially designed to be installed on a wall that has already been tiled. This system allows you to install a stone corner shower shelf without running the risk of damaging your shower. Really, you won’t need to remove, cut, or sand any tiles. Without these invasive cuts to your walls, you avoid potential problem areas in which water can seep behind the tiles and cause mold, leaks and more.

Unlike other shelf systems on the market, the GoShelf uses no visible means of support. There are no metal brackets that need to be screwed into the wall or that will rust as time goes by. With just a little glue and four anchor plates, the GoShelf mounts on top of the existing tile and holds up to 200 pounds!
Seeing is believing, so check out just how quick and easy it is to install the GoShelf!

DIYers love the GoShelf installation system because they really can create a professional-looking shelf without hiring a contractor. At the same time, tile contractors love GoShelf, too.
Luis T., a contractor in Delaware proves that once you GoShelf, you never go back!

“I’m a tile contractor out of Delaware and every once in a while I get a call from a customer that would like to add shelves to an existing tiled wall. Now if you ever done this before you know that it’s not an easy task! For a few good reasons – You need to cut the tiles then carefully remove a good portion of them, making it very easy to break the tiles if you’re not careful. You also ruin the cement boards integrity by cutting into it and pulling/yanking on the tiles to get them off and in most cases you create a hole or gap that go all the way through to the back of the wall making it susceptible to leaks in the future. Also how much time it takes when you do it this way! The GoShelf system really takes the headaches out of this type of project. You simply remove a small amount of grout, add the mounting plates, install the shelf, and then grout/caulk it in. It’s that simple! I would never think of doing this type of project again without the GoShelf system!”